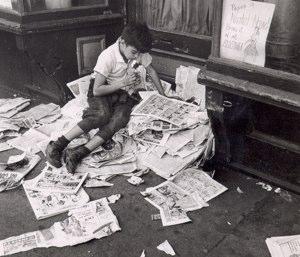 This paper boy will be taking his pile of Western Mails straight to the recycling centre, it has been claimed

THE self styled national newspaper of South Wales could be read by absolutely no-one by 2021, according to a ‘journalism academic’.

Dr Andy Williams claims in an extended essay, ‘Stop Press? Crisis in Welsh newspapers and what to do about it’ the Western Mail could have no readers left in 10 years if it keeps shedding them at its current rate.

In his doomsday scenario the newspaper would be left untouched on shelves next to the Daily Sport – if that’s still published in a year’s time, never mind 10.

Dr Williams, an acknowledged expert on the copy and paste from a press release industry, has shown how since 2000 the circulation of the Western Mail has dropped by roughly half, from just under 60,000 to a little under 30,000.

Cartesian Plane, professor of simple mathematics at Bangor University, explained how the academic had reached his nightmare zero circulation figure: “What he’s done is looked at how many sales the paper made 10 years ago and now, worked out the difference and then looked at how long it will take for that paper to reach zero. Fortunately for him it’s a relatively simple sum.

“Using the same formula in reverse we can predict that if over the same 10 years Cardiff City Football Club’s average home attendance increased by 14,399 to just over 22,000 then in 10 years time they will need a stadium capable of holding nearly 37,000. Simples.”

Professor of Welshness at Aberystwyth University, Meurig ap Cymro said the Western Mail faces the challenge of reflecting a changing country: “For over a hundred years the Western Mail has captured Welshness with its house style of rugby, chapel and rain on grey slate but now has to try and build Charlotte Church and the fabulous life of Catherine Zeta Jones into that mix.

“While its traditional readership of non conformist ministers and retired rugby obsessed grammar school teachers may be willing to accept the odd article about the Welsh Assembly the paper must try not to antagonise them with celebrity pap intended to interest the new breed of literate Welsh women.

“Ironically though reading the paper can feel like an instruction guide to being a Welsh patriot, the paper was selling over 90,000 copies a day back in the 1960s and 70s when it was known as Llais y Sais.”

A spokesman for Western Mail owners Trinity Mirror declined to comment, but did say: “Would you be interested  in a subscription, we’ll even throw in a free Welsh rugby wrist band.”

We like the news, we like the news from Wales, we like having a laugh - surely the news isn't meant to be taken seriously, is it?
View all posts by welshnewsnot →
This entry was posted in Entertainment, South Wales and tagged Journalism, Western Mail. Bookmark the permalink.