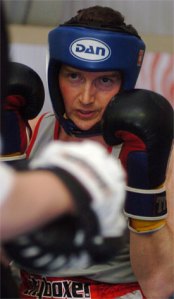 Put your dukes up young fella, David Davies MP is promising a beating for little rascals

A WELSH Tory MP has promised to deliver a ‘bruising’ to lower income children – in a specially erected boxing ring at his local comprehensive.

Monmouth MP David Davies plans to regularly visit the town’s secondary school and climb through the ropes to rain down punches on teenagers less than half his age forced to challenge him in the ring.

“I see nothing wrong in a grown man donning boxing gloves and knocking seven bells of shit out of some teenage oik,” said 41-year-old Mr Davies who has taken part in several amateur bouts, styling himself as the Tory Tornado.

“I would far rather these boys have their heads blown off in the boxing ring than by smoking cannabis, it’s far better that they have some sense beaten into them by myself instead,” added the politician who also serves as a British Transport Police Special Constable.

“I’m fed up with anti-social behaviour  from feral youths. I often see young thugs in baseball caps and hoodies sitting around, looking bored in Monmouth’s picturesque and historic town centre and think to myself, ‘you’re cruising for a bruising.’ Well that’s what they’ll get now.”

And he dismissed claims from critics that other sports would be more appropriate: “The problem with football is I would have to try and hurt these hoodies using just my feet and while it’s true that I could inflict some serious damage to a hoodlum on the rugby pitch, I would still have to run and chase them. It’s far better that these schoolchildren stand and fight me like a man in the boxing ring.”

Andy Williams, who is deputy head at the 1,650-pupil school, said parents had been told about the plans.

He said: “This came about because we had a couple of lads who were exhibiting very challenging behaviour.”

We like the news, we like the news from Wales, we like having a laugh - surely the news isn't meant to be taken seriously, is it?
View all posts by welshnewsnot →
This entry was posted in Politics, South Wales and tagged Boxing, Conservatives, David Davies MP. Bookmark the permalink.